LET THERE BE NORM, Archive Kabinett & Scriptings invite to

Thursday, 30 March 2017, 8 pm
Screening of PDGN - a short film by Nicoline van Harskamp , followed by a conversation with Aykan Safoglu

Language as a system of power. Spoken words as embodied language. Words from the past and words from the future. A software to project future languages. Theatricality and democratic processes. One singular language or creole plurality. A new Latin or a new Patois. One English or multiple Englishes.

Nicoline van Harskamp (*1975) lives and works in Amsterdam. Her films and performances have been shown at BAK, Utrecht and De Appel, Amsterdam (both 2016); Kunstwerke, Berlin and Tapies Foundation, Barcelona (both 2015); Sydney Biennale (2014); BMW Tate Live Performance Room, London (2013); Manifesta 9, Genk and Frankfurter Kunstverein (both 2012); 4th Bucharest Biennale and Stedelijk Museum, Amsterdam (both 2010), among others. Currently, van Harskamp works as professor for Performance Art at the Academy of Fine Arts in Münster.

Aykan Safoglu (b. in Istanbul, 1984) lives and works in Berlin. Safo?lu yearns to find forms of friendship. Often with participatory aspects, his artistic practice is non-medium-specific, trespassing various disciplines.

Some Name Some Noun Simply is presented as a collaboration of Scriptings/Achim Lengerer, Archive Kabinett and LET THERE BE NORM.
LET THERE BE_ is a non-profit project dedicated to examining a yearly topic with international artists and thinkers. The theme of 2016/2017 is NORM.

Some Name Some Noun Simply is a short play written and directed by Nicoline van Harskamp, performed by Serge Fouha, Kenneth Philip George and Monica Reyes.

Please join us for the premiere of Some Name Some Noun Simply by Nicoline van Harskamp on Sunday September 17th. Taking place during the Berlin Art Week, the play will be staged three times at Archive Kabinett. After each performance, there is a question and answer moment with Nicoline van Harskamp. Dinner will be served after the third and final performance.

Some Name Some Noun Simply is set in a not too distant future. Global travel and global trade have disappeared and global languages have changed. Its three protagonists arrive from different parts of the world at a place they call the Onomasticon. It is a former site where names were inflicted on people, or taken away from people, such as an immigration office or city hall. To them, it is a memorial site for a redundant system where names were tools of surveillance, and a currency in data-mining industries. And although they are happy that the linguistic injury of naming has been put to an end, they each still have their sensitivities in relation to it. These come to light in their short encounter, which ends in an attempt to rename each other using nouns and verbs only.

The three performers use a link-language, a ‚lingua franca’, built up from the ruins of today’s global English. Nicoline van Harskamp created this language by applying distorting factors to existing non-standard forms of English. These ‘distorters’ include characteristics of English currently spoken between non-native speakers; rules of link languages created in fiction; and traits of Creole languages from the past and present.

The language of the play departs from Nicoline van Harskamp’s short film “PDGN” (16 min 21 sec), that will be screened continuously on Thursday, 14 September 2017 from 7 pm – 9.30 pm at Archive Kabinett.

Some Name Some Noun Simply is presented as a collaboration of Archive Kabinett, LET THERE BE NORM, Scriptings and the artist. Subsequent stagings will take place at Veem House for Performance in Amsterdam and Tenderpixel in London.

no admission during performance 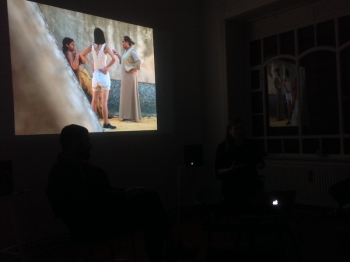 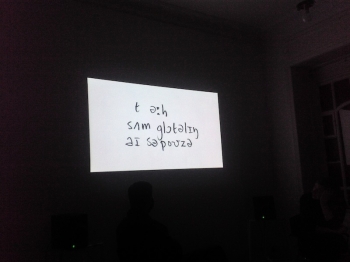 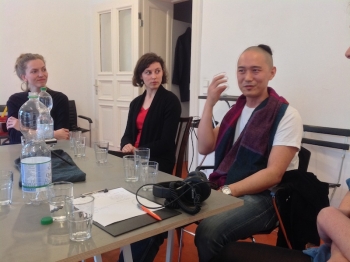 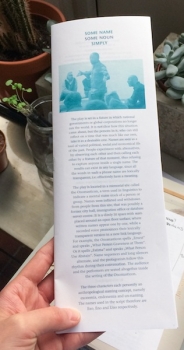 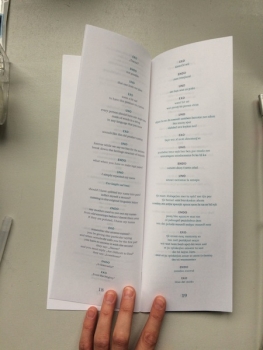 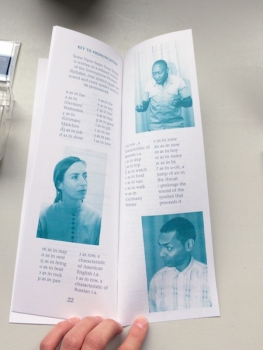